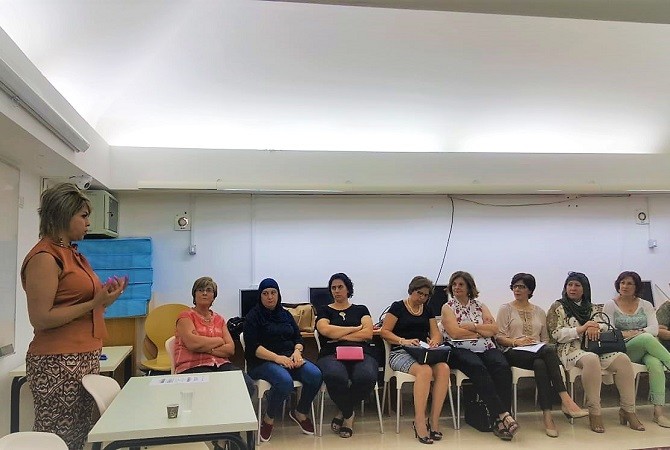 Arab women running for office in Israel’s October 30 local elections came together in Nazareth on October 15 for the first conference of its kind. The conference marks the milestone in a wide-reaching campaign in Arab society to increase women’s involvement in politics, organized by a coalition of 11 Arab-led organizations including Women Against Violence (WAVO), Arab Women in the Center (N.A.M.), Sidreh Asociation, Al Tufula, Mosawa, Tishrin and Na’amat.

Under the slogan “Sawteq Qow’ah,” meaning “Your Voice is Strength” or “Your Presence is Strength,” the campaign has encouraged Arab women to present their candidacy for local councils, encouraged the Arab public to vote only for party lists that include women, and aimed to include women’s issues in discourse about the elections. Barriers to such participation are significant in Israel’s Arab society, where traditional gender roles play a dominant factor limiting involvement in the public sphere. Women’s employment rates have only recently climbed to 34 percent, and though this is seen as an economic necessity, Arab women’s empowerment is still commonly met with cultural resistance from within.

The conference was attended by about 100 women, activists as well as candidates from Arab municipalities and mixed Jewish-Arab cities around the country. It was moderated by Iman Kassim-Sliman, a leading figure in Israel’s Arab media, who opened by saying: “I see a change in the participation of Arab women in local elections this time around; women are more visible in the public space and in the media…We want Arab women in the political sphere and within decision making circles. This is not at the expense of Arab men, as we are not trying to replace them but rather to build partnerships with them.”

Na’ila Awad, Director of Women Against Violence, spoke about the gradual progress following years of empowerment and education by civil society organizations within Arab society: “We are seeing a change in our society’s attitude towards women…We believe women have the ability and capacity to participate in local leadership and that they also bring to the table a different angle and different capabilities of professionalism and a humanistic approach…This approach can save us from phenomena such as internal violence and corruption which we are experiencing.”

Municipal elections will be held on October 30 in 251 Israeli cities, local councils and regional councils, including all Arab municipalities except three that held special elections in 2015.

In Kfar Qara, Meghar and Ein Kinya, Arab women are candidates to lead the local councils. An increased numbers of Druze women are also running for local elections and for the first time a Druze woman is running for Council Head, in the Golan Heights Druze village of Ein Kinya, and an all-woman list has been presented in Usafiyya.

Municipal elections in Israel are held every five years. According to a Knesset Research Center report from March 2018 (Hebrew), representation of all women in local government in Israel is extremely low, averaging 13.5 percent, which is half the rate of female representation in the Knesset, which stands at 28 percent with 34 women MKs. Only four municipalities in Israel are headed by women. According to the report, in the 2013 municipal elections, 270 Arab women ran for election, representing about 4 percent of Arab candidates. Only 16 of them won seats as council members, with four of those in Nazareth. A single Arab woman, MK Haneen Zoabi, ran unsuccessfully for mayor, also in Nazareth. To date, one Arab woman has been elected to head an Arab local council or city: Violet Khuri, who was elected Council Head of Kfar Yasif in 1972.

In addition to the work of the coalition of Arab organizations working to engage female candidates, a wider coalition of Israeli women’s organizations called “Mekomiot 2018” has been working for the past year to encourage women to run for local elections and raise public awareness of the issue. This coalition has also been instrumental in advancing women’s role in Arab society, including by empowering candidates. In addition, Bokra.net, a leading Arabic-language news and society portal, which operates out of Nazareth, has been collaborating with the coalition by providing free exposure to women candidates on a specially-created page.

Wave of Arab Women Running in Local Elections in Israel

In First, Arab Women to Run in Their Own Parties in Israeli Local Elections