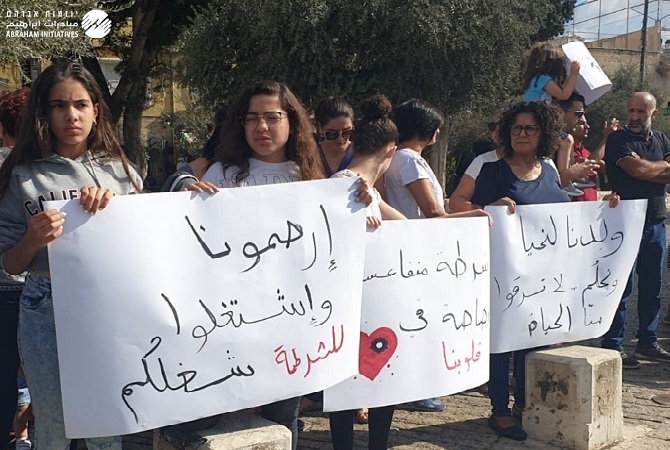 Arab citizens live in an atmosphere of perpetual crime-based terror and life in Arab towns across Israel has become a nightmare. However, it was not always this way. Exactly nineteen years ago, after the Israel Police demonstrated how it perceives Arab citizens (reminder: it ended in 13 Arab citizens losing their lives), Arab society rejected the presence of law enforcement forces in its towns. The Israel Police, on its part, minimized its contact with Arab citizens and thus did not provide law and order services across Arab towns. Under-policing services prevailed and resulted in a severe vacuum of policing services that lay the foundation for crime and violence to spread across Arab society. It is clear that this has had disastrous results.

Over half of murder victims in Israel are Arab (whilst they represent 20% of Israel’s population). 2019 marked a steady increase in the number of murders and crimes, with 65 Arab citizens murdered (55 male and 10 female) to date. This represents a 47% increase from last year’s statistics.

Today (October 3rd, 2019), the Arab public will begin strikes and demonstrations in protest against the violence and crime suffered across Arab society. These strikes are expected to take place across the State. The Abraham Initiatives has worked towards fair, equal and adequate police services for Arab citizens since the October 2000 events. Our work over the past two decades shows there is much more to do and there is no single magic solution for resolving the convoluted relations between law enforcement and minority populations. One must see the big picture of this situation in order to put an end to violence and crime in the Arab communities.

Only a multilateral response, which includes the collection of illegal firearms, establishment of new police stations premised on equal policing services, and effective and holistic response to socioeconomic challenges, can provide the course of action to end violence and crime across Arab society. An immediate emergency plan must be developed by the Israel government.

This statement is a translation of an article by Mr. Amnon Be’eri Sulitzeanu and Dr. Thabet Abu Ras, Co-Directors of The Abraham Initiatives, as published in Hebrew in Haaretz newspaper.