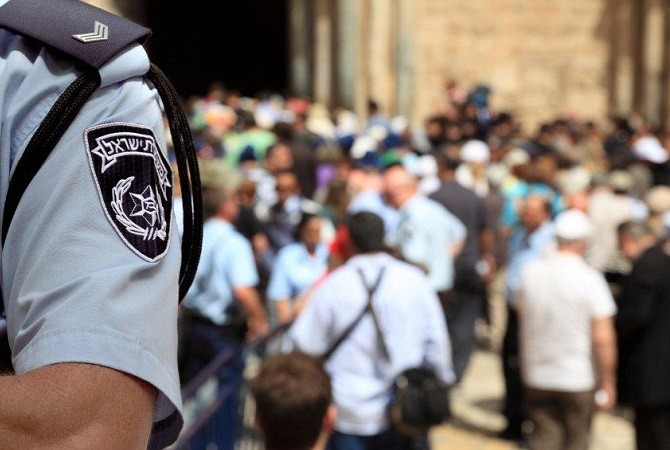 Police arrested two residents of the Arab-Israeli seaside town Jisr e-Zarka on Wednesday following a covert investigation into a shooting incident at the local police station a week and a half ago.

The two suspects, both in their thirties, are suspected of involvement in a late-night shooting on one of the walls of the station. Police said that in light of the gravity of the incident, the investigation was directed to the central unit, whose investigation led them to the two suspects. The two were arrested and taken for questioning and on Thursday will be brought to the Haifa Magistrate’s Court for a remand extension hearing.

In a separate incident on Wednesday, police issued a restraining order against two 18-year-old residents of Jisr e-Zarka who tried to take down the Israeli flag from its mast at the police station.

After detaining and questioning the two young men, police released the pair under restrictive conditions, including being banished from their town for 15 days.

Israel Police spokesman for the Arab sector Waseem Bader told The Jerusalem Post that the two men were staying in another village under the supervision of residents of that village who had signed a bail bond for them.

Asked whether the incident was connected to protest against the controversial Nation-State Law which caused uproar among many in the Arab sector, Bader said the circumstances of the incident were still under investigation.

At the conclusion of the investigation, the findings will be forwarded to the prosecution for review, to examine the formulation of an indictment for damage to government symbols.

“The police station at Jisr e-Zarka is working to make the police services accessible to the residents, in order to enable the normative law-abiding public to lead a normal and safe life, while any attempt to violate and harm that will be met with focused and uncompromising enforcement,” the Israel Police said in a statement.

The police station in Jisr e-Zarka – a coastal town of 14,000 known to be crowded, impoverished and crime-ridden – was opened in November as part of an effort to improve the situation in Arab communities, which have suffered from a historic lack of policing.

The plan, led by Public Security Minister Gilad Erdan, includes the establishment of 12 new police stations in Arab towns and cities, and the recruitment of 1,350 police officers. It also involves initiatives for social-police projects in the Arab communities and the recruitment of more than 300 Arab police officers in the villages of Jisr e-Zarka and Kafr Kama, which have both experienced confrontations with Israel Police over the years.

At least half of the residents of Jisr e-Zarka live under the poverty line, and a majority of youths there are considered to be at-risk. A 2017 survey commissioned by the Abraham Fund Initiative found that 95% of Jisr e-Zarka residents believed there was a problem with violence in the town.