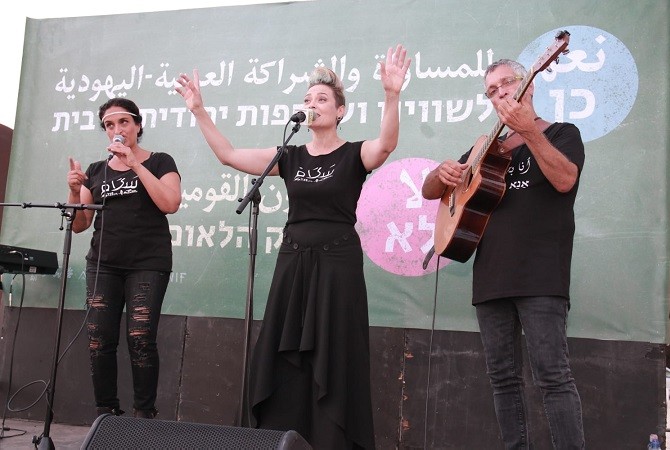 DRIJAT – “Delicious.” That’s an easy one.

“Yes please, I would like some more.” Also pretty simple.

But now the ruddy kibbutznik is struggling. He wants to tell his hosts at this Arab village in southern Israel that if they keep feeding him like this, they’ll have to roll him out the door by the end of the week. Saying that in their language is somewhat more challenging.

At first, they look puzzled. They have no idea what he’s trying to say. But rules are rules, and they agreed in advance not to switch to Hebrew unless specifically asked to do so.

After a few tries, his hosts finally get what he’s saying. The looks of confusion give way to laughter. Patting his belly, the kibbutznik laughs along with them, clearly pleased with his progress.

“I’ve tried to learn Arabic a bunch of times,” says Swiss-born Martin Sessler, a member of Kibbutz Magen on the Gaza border. “If I haven’t made much progress until now, it’s not for lack of trying. My biggest problem is the Arabs I know in this country. Every time I trying speaking with them in their language, they just laugh at me and move straight into Hebrew.”

Which is why he decided to try something different. Sessler, 71, is one of a dozen Jewish Israelis participating in a unique crash course in Arabic. Rather than spend their entire day in the classroom, these students are being put up in the homes of Arab families. They sleep under the same roof, eat their meals together, share the same bathroom and, at the end of each day, schmooze on the porch together, relishing the cool desert air.

The idea is not only to immerse themselves in the Arabic language but also in Arabic culture.

It’s a five-day program, called Al-Masdar (Arabic for “The Source”), and the 2,500-shekel price tag ($690) includes room, board and eight hours a day of spoken Arabic lessons.

The first session was held last week in Drijat, the only non-Bedouin Arab village in the Negev desert.

Last month, the Knesset passed the controversial nation-state law, which downgrades the status of Arabic as an official language in Israel. Tens of thousands of Jewish Israelis have already expressed their opposition to the law by demonstrating in the streets. Others have chosen a subtler form of protest: signing up to learn Arabic.

“The timing couldn’t have been better,” concedes Or Amar, the 31-year-old brains behind this new initiative. Indeed, no sooner had he advertised the course on Facebook than it was fully booked. He’s now opened up registration for sessions that will be held in Arab villages in northern Israel after the upcoming Jewish holidays.

Amar can testify from personal experience about the benefits of learning a language this way. Ten years ago, after he completed his army service, his grandfather gave him an unusual gift. “He knew I was dying to learn Arabic, so he sent me to the family of an Arab friend of his and had me live with them for three weeks,” he recounts. “Within a matter of days – I kid you not – I was speaking Arabic. I had no other choice. Ever since, I’ve been dreaming of setting up a business that offers other Israelis an opportunity like this.”

That friend was from Drijat. He had been employed at a dairy owned by Amar’s family in central Israel; the two families are still in touch. In fact, Ishak Abu-Hamad, the son of his grandfather’s friend, is now his point man in the village. A certified Arabic teacher who serves as principal of the local school, Abu-Hamad, 64, delivers the daily language lessons for participants in Amar’s program and arranges housing for them.

Although Arabic is the mother tongue of 21 percent of Israel’s population, a surprisingly small percentage of Jewish Israelis speak it.

According to a study published last month by Sikkuy, an organization that promotes civic equality in Israel, only 8.6 percent of Jewish-Israeli adults have some knowledge of Arabic, as compared with 60 percent who said they could speak English. Of those who do speak Arabic, only 18.6 percent said they had acquired the language at school. In other words, less than 2 percent of those Jewish Israelis who speak Arabic had picked it up in school (compared with two-thirds who speak English).

Although Arabic is compulsory for all Israeli middle-school students (grades seven through 10), many find a way out of the requirement. To make matters worse, in 2014 it was switched from a requirement to an elective for 10th-graders. Ever since, according to the Sikkuy findings, the number of students studying Arabic in high school has dropped by more than two-thirds.

“Arabic classes for adults are definitely booming – and that includes all sorts of online efforts to encourage people to learn the language,” she says. “It’s still too early, though, to say that this is directly connected to the nation-state law,” she cautions.

“Perhaps because it’s an issue I deal with professionally, but it’s amazing how many people I’ve met recently who tell me how much they regret not having studied Arabic earlier,” she continues. “The problem is that the Education Ministry does so little to incentivize it.”

The Abraham Fund Initiatives, which provides grants to shared society projects, has begun offering courses for professionals who stand to benefit from knowledge of Arabic in their daily work, such as doctors, journalists and university faculty. May Arow, who runs the organization’s Arabic language program, points to the silver lining in the nation-state law: “All the noise around it has made people aware of the importance of Arabic,” she says.

Last month, an event billed as “the biggest Arabic lesson in the world” was held in Tel Aviv, as part of protests against the nation-state law. Arow was one of the teachers on the podium delivering the lesson to thousands of participants.

“It’s amazing how many of my students came up to me after the event to say hello,” she recounts. “It just goes to prove that there are lots of people out there who’ve started studying Arabic.”

After four-and-a-half hours of classes at the local school in the morning, the students walk up the steep hill in Drijat to their host families, where they will take a break for lunch.

It is a diverse group in this inaugural session, including kibbutzniks and high-techies, one religious fellow who covers his yarmulke with a cap and a couple of new immigrants from France. They range in age from early thirties to late eighties.

The walk is especially challenging for Yoram Yonani, 74, who recently suffered a stroke and requires a walker to get around. “I’ve been dreaming of doing something like this for years,” he says, “so I wasn’t going to give up this opportunity – even though my family was worried that I wouldn’t be able to handle the experience.”

He is already familiar with the Arabic alphabet as it is also used in Iran – where he was born and grew up – and he figured this might give him a head start in class. As his hostess Hoda leans over to help him cut the food on his plate, he makes an effort to converse with her in Arabic. It seems to be going well.

Yisrael Ben-Yehuda, a retired company executive from the southern coastal city of Ashdod, is 86. Because his host family doesn’t have an extra bed, he is sleeping on a mattress on the floor, sharing the room with another program participant. He doesn’t seem to mind, though. “Hoda comes in to make sure I have enough air at night, and I’m thoroughly enjoying the experience,” he says. “Actually, living with a local family was the part of the program that really appealed to me.”

Nadav Lidror, a middle-aged professional tour guide, is a member of Kibbutz Urim near the Gaza border. He says he always wanted to learn Arabic because his work often requires him to bring visitors to Arab townships and villages.

“I’m also one of those god-awful leftists,” he says, a mischievous sparkle in his eye. “And every few weeks, I travel to the South Hebron Hills in the West Bank to visit families I know there. Many of them speak Hebrew, but not all, and I was hoping that after taking this course, I’d be able to communicate with them in their own language.”

Chaim and Mira Cohen, a married couple in their sixties from Kibbutz Ma’anit in northern Israel, deliberated a bit before signing up. “This is our time off and I had planned on spending it with our grandkids,” says Mira Cohen. “But then I consulted with my daughters, and they insisted that we do this. I have to say, this place is so isolated and so different from everything we’re used to that it actually feels like we’re on vacation abroad.”

It’s not the first time she’s tried to learn Arabic, but feels she’s taken in a lot more during this latest round. “I’ve definitely gained a lot more confidence speaking the language,” Mira says.

To feel more at home, her husband Chaim has brought along his bicycle from the kibbutz. The trips down to the school in the morning are a breeze, he says, but getting back up the hill for lunch, during the hottest hour of the day, can be a challenge.

His purpose here, he explains, is not only to pick up a new language. “We may be few and far between,” he says, “but there are actually people like me in this country who believe that the Zionist dream will only be realized when the Arabs here also have it good.”