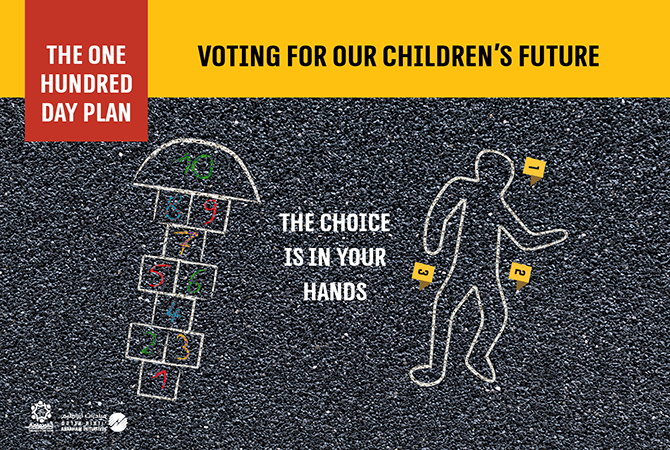 A campaign calling for the public to vote to address the rising violence effecting Arab society in Israel, and demand that Knesset members join the 100-Day Plan to combat crime

At the heart of the campaign, led by the Abraham Initiatives and the Aman Center, is the demand that Knesset members and candidates commit to taking five immediate steps in the first 100 days of the establishment of the 23rd Knesset:

Officially declaring crime in Arab society an emergency, budgeting for and expanding programs to combat violence against women, establishing security camera networks, passing stricter legislation and punishment against crime organizations, and the elimination of drug and illegal weapon selling points.

The Abraham Initiatives and Aman Center Launch Today (Tuesday, February 11, 2020) a Broad Public Campaign Calling on the Arab Public to Vote Against Violence and Crime, Demanding Members of the Knesset from All Political Stripes to Prioritize Commitment to promoting the 100-Day Plan to Eliminate Violence:  A 5-step concrete plan to be implemented immediately after the next Knesset is elected. The campaign includes billboards in Arab communities across the country and widespread digital advertising.

To Join and support the campaign – http://bit.ly/31FH8Ml

The 100-Day Plan to Eliminate Violence and Crime in Arab Society was born of the acute need to produce real and immediate solutions, along with long-term processes, to deal with the plague of violence and crime in Arab society. This campaign builds on the momentum created by the Arab society protests, which have already brought about significant achievements. The goal is to persist with public and parliamentary pressure until the problem is resolved. The plan is led by the Abraham Initiatives and Aman Center – civil society organizations that have been involved in this field for many years.

The 100-Day Plan to Eliminate Violence and Crime in Arab Society:

Dr. Thabet Abu Rass and Amnon Be’eri Sulitzeanu, Co-CEOs of the Abraham Initiatives, said: “Over the past year, hundreds of thousands of Arab citizens and civilians have joined the struggle, and the Arab leadership has led the fight against the government. We have achieved significant results, and brought this issue to the forefront of public and political discourse. The 100-Day Plan is an immediate and important call that will drive a broader process of combating violence and crime. This time we have to vote to make sure that happens.”

Aman Center Chairman Sheikh Kamal Ryan, who lost his son in a violent incident, said: “Arab society in Israel has never faced a social disaster of this magnitude. Only widespread mobilization and pressure from all of us on the government will force anyone who takes Arab society seriously to begin to deal with the violence. ”

Advocate Rada Jaber, Director of the Aman Center, said: “We see the problem of violence and crime as a political issue related to various government policies and institutions, and their relationship to Arab society. The larger and more significant our political representation, the more we can put pressure on the government to address the issue. ”

The Abraham Initiatives is a Jewish-Arab organization for social change which promotes integration and equality between Jewish and Arab citizens of Israel, for a prosperous, safe and just society. The organization runs the “Safe Communities” initiative, which is entirely dedicated to enhancing the personal security of Arab citizens of Israel in an effort to combat violence and crime.

The Aman Center is the Arab Center for Safe Society. The organization works, develops and implements educational, public and media programs, and mobilizes institutional and civilian forces to combat the phenomenon of violence and crime.