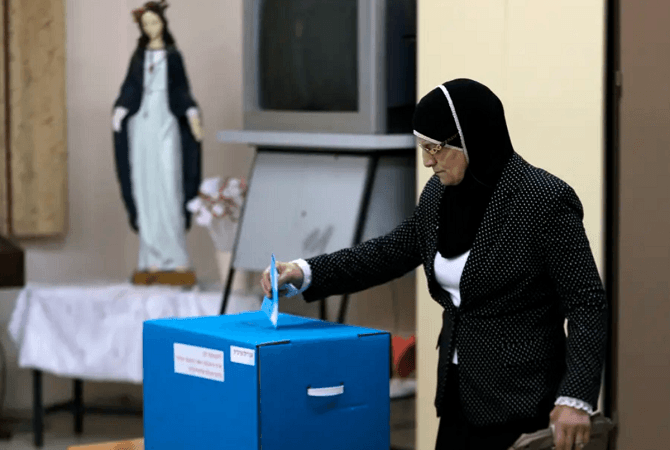 Arab voter turnout was up by 10% in the last elections.

On September 17th 2019, Israeli citizens voted in a second election, which was the culmination of an intense election season. During the past few months, once again the status and role of Arab citizens in the political sphere was a major issue.

Along with our partners at Sikkuy, and the aChord Center, we launched an in-depth study, systematically examining for the first time the reasons for Arab citizens’ voting patterns. The first phase of the project, published at the end of July, showed two important factors that would motivate Arabs to vote: (1) inclusive messages by the center-left parties; and (2) reuniting of the Joint List. The survey also showed that a third of Israel’s Arab citizens were still undecided about voting. Read the full report of the survey on our website, here. First published on Channel 12’s evening news edition, the survey results changed the discourse around the participation of Israeli Arabs in the elections. The report was covered in the press and referenced in various TV & radio interviews, op-ed articles and commentaries.

Although we were able to prove that inclusive messages regarding political & civil issues were of great importance to Arab voters, some leaders were still hesitant to take real steps in this direction. “We perfectly understand that this will increase the turnout rate among Arabs, but we may drive some of our Jewish voters away and it isn’t worth it for us” these leaders told us. So, in order to empirically check how Jewish voters would react to inclusive messages directed to the Arab citizens (coming from Jewish Zionist leaders), we commissioned and published another groundbreaking  survey. This survey indeed proved that engaging Arab voters does not damage support coming from Jews for center-left parties. Read the full report of the survey on our website, here.

Following the findings of these surveys, we launched a direct influence campaign, that included a series of meetings and presentations with leaders from a wide range of parties that share our core values: Mks Benny Gantz and Ram Ben-Barak (Blue & White), Nitzan Horowitz & Ehud Barak, Yair Golan and Esawi Freij (Meretz / Democratic Party), Amir Peretz and Merav Michaely (Labor), Ayman Odeh, Ahamed Tibi, Mansour Abbas and Walid Taha (The Joint List) and others.

The influence of this campaign could not be missed in the streets of Arab cities, news websites and social media. Most significantly, both the Blue & White party and Labor party launched, for the first time, massive campaigns aimed at Arab society. These campaigns included interviews for Arabic-language media, billboards, digital advertising, and social media campaigns. The messages of their campaigns reflected the findings of our survey, promising to push for equality, and address civil issues of importance to Arab society.

We also reached out to the press to increase awareness of the different perspectives on the elections coming from Arab. These efforts included meetings and field tours with reporters, such as Haaretz’ Judy Maltz and Yardena Schwartz who published the story  “Why Bibi Fears Arab Voters“ for the NY Review of Books.

Our offer to Nahum Barnea, Israel’s most prominent political commentator (Yedioth Ahronot) to tour Umm al-Fahm with us,  proved to be a game changer.  The goal was to highlight the diversity of Arab political perspectives related to the upcoming election. Barnea met with people from Hadash, Balad, The Islamic Movement and even from a radical group called Ebna el Balad who rarely gives any interviews. The tour’s immediate result was an in-depth double-spread piece in the weekend’s political section of Yedioth Aharonot, but more importantly, it paved the way to a follow-up historic interview with MK Ayman Odeh in which the Joint List leader agrees to join a government coalition.

These efforts were rewarded with a significant rise in the turnout rate of Israel’s Arab citizens. We are encouraged by the fact that, with the help of others in civil society, we have managed to focus the attention of the leading political parties on the needs of the Arab citizens, and in doing so enabled dialogue and a true potential for Jewish-Arab collaboration in the Knesset and the government.

Donate in the UK