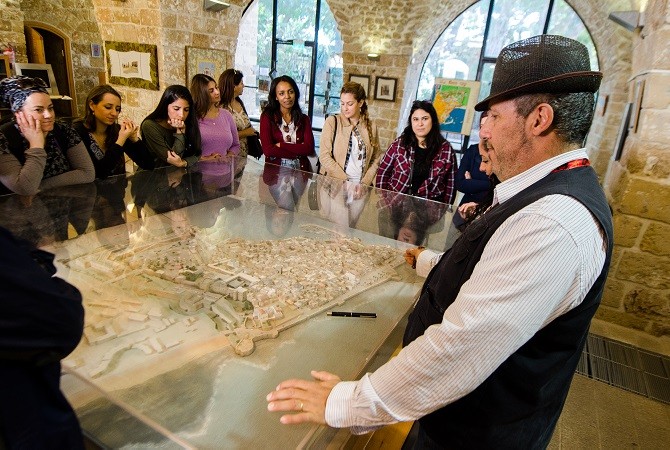 The lecturer at Tel Aviv University touched on a broad range of topics about the Arabs in Israel: the Nakba of 1948, the fatal Land Day protests of 1976 and surging violent crime in Arab communities today, to name a few.

“After the Second Intifada, the police did not want to enter Arab places. A vacuum was created for crime. In 2004 the government went after Jewish criminal families, and the crime moved to Arab areas, with illegal weapons and drugs. Of the seven largest crime families in Israel, four are Arab,” said the lecturer, Rasool Saada, on Tuesday.

Those listening intently were not students in an introductory course for freshmen, but, rather, a group of about 50 university administrative staffers who are engaged in cultural awareness training by the Abraham Fund Initiatives, of which Saada is a staffer. The goal is to make the growing number of Arab citizens studying at Israeli universities feel more comfortable by making the staff more understanding of where they are coming from and how much of a challenge it is for them to adopt to life on campus.

“We’re trying to make life easier for the students,” said Thabet Abu Rass, co-director of the Abraham Fund Initiatives. At present, the first-year dropout rate for Arabs at some universities is as high as 30%, due in part to cultural difficulties and alienation, he said.

With its eye on raising Israel’s GDP by boosting Arab income levels and employment, the government has invested half a billion shekels over the last five years in a bid to bring more Arabs to colleges and universities, funding scholarships and preparatory courses. The number of Arab students in colleges or universities has risen from 34,457 in 2013 to 46,855 in 2017, according to government statistics. But the number of Arab faculty remains minuscule.

The lectures by the Abraham Fund are supplemental to separate elementary Arabic classes that the TAU group takes. They are part of a larger trend, now encouraged by the government, to cultivate greater cultural sensitivity to Arabs at universities. The Hebrew University, Ben-Gurion University and Western Galilee College are among other campuses where the Abraham Fund gives lessons. Late last year, the government for the first time began to fund cultural sensitivity training, inviting institutions to apply for a share of the NIS 3 million it allocated for this.

SAADA, WHO was head of the Arab department at the National Union of Israeli Students in 2009-13 when he studied law at Bar-Ilan University, spoke about the rampant violence in Arab society for a reason: He wanted to give his listeners a sense of what the Arab students encounter when they go home on weekends.

“It creates great dissonance for them, because what they hear at home is gunshots,” he said.

Saada stressed that the Arab students arrive on campus at age 18, three years younger than their Jewish counterparts.

“It’s a time when you are getting to know yourself,” he said. “You have cut yourself off from home. You start meeting Arabs from other parts of the country. You’re in a foreign sphere. You are meeting Jews in a different way. Until then, you only met them as a policeman, a guard or a vendor in a mall.”

He said it took him a while to get used to professors who insisted on being addressed by their first names rather than by their titles.

“Feeling free to interact with the lecturers and staff is a challenge,” he said.

He also stressed to his audience that Arab students often come from poor backgrounds, and it is a great strain on their families to finance their studies. So the stakes for them to succeed are high.

One of the biggest problems alienation. “We don’t feel we belong to, or are involved in, what is around us,” he said.

That none of the campus landmarks or sites are named after Arabs increases the feeling of being in foreign territory. And the environment can be blatantly unwelcoming, he said, as when Arab students experience difficulties renting apartments in Tel Aviv.
Another challenge is linguistic, not only in terms of Hebrew but also having to pass an exam in English, which for Arabs is a third language.

In Abu Rass’s view, addressing the alienation requires “changing the physical and cultural space in the campuses.” This would include using Arabic signs and taking into consideration Muslim and Christian holidays. “We’re trying to raise awareness of diversity, so that the campus can be more multicultural.”

Abu Rass said he has found the rectors and deans at universities and colleges “very responsive” to boosting cultural sensitivity.

But he said a major problem overshadows the efforts to make Arab students more comfortable: less than 2% of faculty and less than 1% of administrative staff at the universities and colleges are Arab. “Some universities don’t have any administrative workers who are Arab, and this is not acceptable at all,” he said.

However, the Council for Higher Education is pushing for change on this by conditioning funding for universities to their hiring more Arabs, he said.

Lisa Beinin-Ratz, one of the staffers at TAU who was at Tuesday’s lecture, termed it and other presentations “interesting and enlightening.”

“As a dominantly Jewish institution in a politically complex situation, it is our responsibility to treat all students as equal, meaning they get consideration for the things that are different about them,” she said.