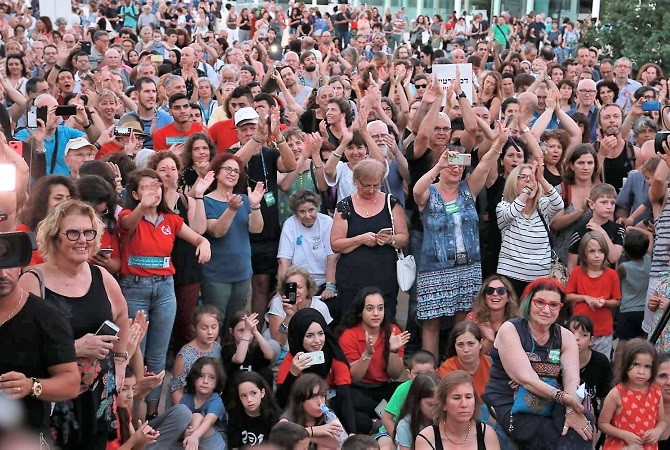 It was billed the biggest Arabic lesson in the world, and on Monday evening organizers estimated that a few thousand Israelis participated in the mega-event held in one of Tel Aviv’s big city squares.

In addition to learning new words in Arabic, the crowd was treated to performances by Jewish and Arab musicians and artists.

Organized by a consortium of Israeli civil society organization, the event was held to protest the controversial nation-state law, passed by the Knesset this month, that downgrades Arabic as one of the country’s official languages. T-shirts sold at the event had the words “I love Arabic” (in Arabic words, but Hebrew letters) printed on them.

The crowd included Jews and Arabs, including many who had traveled long distances to attend. They repeated basic words and terms in Arabic after the teachers, who delivered their lesson from a central stage, sometimes with translations into in Hebrew, but often not.

Chai Margolis, a 16-year-old from the central Israeli town of Modi’in, had arrived at Habima Square with a group of friends, all active like him in an organization called “Debate4Peace.”

“Personally, I feel you can’t have a democratic nation-state that doesn’t treat minorities as fully equal,” said Margolis, who wore a yarmulke on his head and carried a sign that had the words “Understanding Starts with Talking” printed on it in several different languages.

The event opened with a performance by Miriam Tukan, the first Arab to participate in “Kochav Nolad” – the Israeli equivalent of “American Idol” – and the first to sing in Arabic on the program. She was accompanied on guitar by Idan Toledano, a Jewish musician active in various initiatives shared society initiatives.

The opening address was delivered by Sameh Saleimah, an Arab feminist activist from the mixed Jewish-Arab village of Neve Shalom, also known as Wahat as-Salam.

“My mother’s dream was to be a teacher, and today, with the hundreds and thousands of you standing out there, her dream is being realized,” said Saleimah, who urged Arabs and Jews to join forces in fighting the right-wing government of Prime Minister Benjamin Netanyahu.

Among the highlights of the events were several duets sung by Achinoam Nini, a Jewish musician, and Mira Awad, an Arab musician – both of them prominent peace activists who often perform together.

Anat Ben-Yehoshua, who lives in nearby Ramat Gan, said she was simply happy that an event of this kind could take place and that she could part of it. “Things have become so depressing here with this government that something like this provides hope,” she said, holding her dog by his leash.

The sponsoring organizations were the New Israel Fund, the Abraham Fund Initiatives, Sikkuy, Givat Haviva, Yad b’Yad (a network of Jewish-Arab schools around Israel), Omdim b’Yachad (a relatively new non-profit that, like the others, supports shared society in Israel) and Neve Shalom.

Edan Ring, the director of public affairs for Sikkuy, said the turnout proved to him that “there is a big public out there whose voice is not being heard.”

“These are people,” he added, “who see Arabic as a cultural treasure rather than a threat, as some of our politicians do. It is truly sad that we have come to this, that speaking Arabic in the center of Tel Aviv is today seen as something subversive.”

Amnon Be’eri-Sulitzeanu, co-executive directive of Abraham Fund Initiatives, said the many Israelis who had come to participate “understand that we are at a critical junction – either we choose Apartheid or we choose inclusion.”

These Israelis, he said, “understand the importance of the Arabic language and are not going to give up on it.”