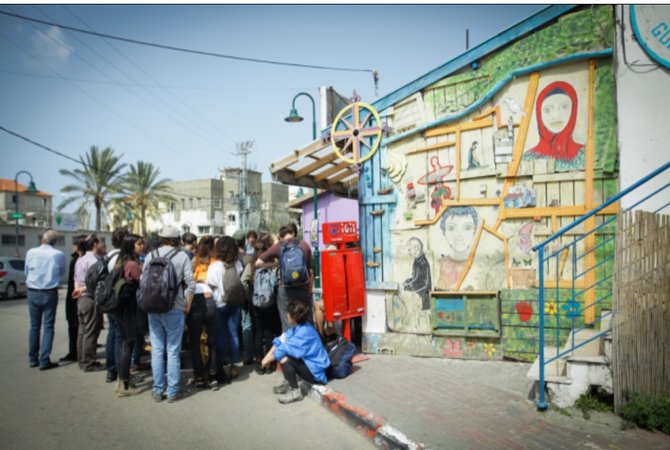 Last week, as part of my internship with The Abraham Initiatives (TAI), a non-profit organization that aims to develop a shared society and promote equality for Arab citizens in Israel, I had the opportunity to accompany staff members on a site visit. Among its many initiatives aimed at mitigating the effects of Israel’s primarily separated school system for Arabs and Jews, TAI launched a program in 2015 called “Meeting in One Land” to teach Jewish high school graduates about Arab society and Arab-Jewish relations in Israel. In collaboration with the Joint Council of Pre-Military Academies (Mechinot), TAI currently runs this program in 5 of Israel’s 54 pre-military academies, which are institutions that provide high school graduates with an additional year of education, volunteer work, and personal development in preparation for their military service in Israel.

Given research that shows an increase in discriminatory attitudes towards Arabs among Jewish high school students as they near graduation, pre-military academy participants are a crucial target audience for teaching about the vision of a shared society in Israel. Moreover, pre-military academy participants are more likely to become army officers and pursue careers in the public service after their military service, which further highlights the importance of advocating for democratic values during this gap year. “Meeting in One Land” consists of 20 classes on Arabic language and culture taught by an Arab facilitator from TAI, two field trips to Arab communities in Israel, and dialogue encounters betw­­een participants and Arab youth.

On our site visit, we observed a class on Arab youth in Israel at BINA, a pre-military academy focused on Jewish pluralism and social change. The facilitator opened the session with his personal story about working in journalism prior to joining the team at TAI, with a particular focus on the difficulties he faced breaking into the field as an Arab citizen. Similarly, he spoke about the more well-known case of Lucy Aharish—the first Arab Muslim news anchor on mainstream Israeli TV who thought “there was no way [she’d] be accepted to the role”—as another example of Arab citizens navigating barriers to career opportunities. “I’m an Israeli Arab, a Muslim girl who speaks fluent Hebrew. People don’t imagine when they see me, that I’m an Arab – that’s an advantage and it has opened doors,” Aharish told The National in 2009.

The discussion then segued more generally into the challenges that many Arabs face in both their academic and professional endeavors:

The class also touched on the important topic of identity among Israel’s Arab citizens, many of whom identify as Palestinians with Israeli citizenship. To call this issue of dual identity complex would be an understatement. Aharish, for example, identifies as Israeli and has long encountered much criticism from both Jewish and Arab communities. As a child attending a Jewish school, she had to deal with bullying and graffiti on walls that read, “We don’t want filthy Arabs in our school.” Meanwhile, during the first intifada, her family members narrowly survived a suicide bomb in Gaza that was detonated because they were believed to be Jews. More recently, when Aharish was chosen as one of 14 individuals to light a torch at the 2015 Independence Day Ceremony, she was similarly hit from both sides: some doubted her loyalty to the state, while others rebuked her alleged obedience to Israel as an Arab.

On the whole, the BINA participants were interested and engaged in the conversation. “I think it’s incredibly important that we learn about and discuss the experiences of Arabs living in Israel. It’s something we should be talking about much more,” one student told me at the end of the class. Indeed, Arabs currently make up roughly 20% of Israel’s population, yet interactions between Arabs and Jews are few and far between. Initiatives like TAI’s “Meeting in One Land” that are geared towards learning one another’s languages, cultures, and narratives hold much promise for improving relations between the two groups and ultimately paving the path towards a shared society in Israel. While they may not directly address issues that are more systemic in nature, success at the grassroots level can lead to adoption at the national level and ultimately drive positive social change through policy decisions.