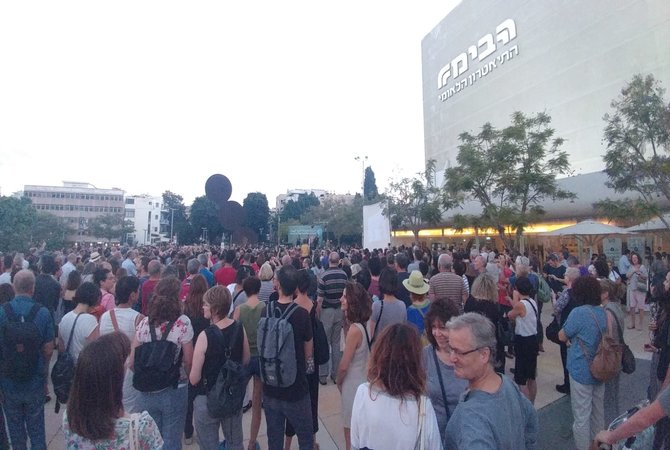 A few thousand Israelis gathered in Tel Aviv’s main square on Monday to participate in a mass Arabic lesson as part of a bid to protest the passage of the controversial nation-state law that downgrades Arabic as a language.

From the central stage in the central Habima Square, the mixed crowd of Jews and Arabs were taught basic Arabic words and terms, often without a Hebrew translation.

The gathering was treated to musical performances by Jewish and Arab artists including Mira Awad, Achinoam Nini and the first Arab to participate in the Israeli equivalent of “American Idol” Miriam Tukan. Meanwhile, T-shirts printed with “I love Arabic” were sold at the event.

“There is no other way if we want to live here together we need to speak each others language,” May Aro, an Arabic teacher at the Abraham Fund, told i24NEWS. “I am very happy to see Arabs and Jews sharing and living together, today I stand together with my students and colleagues,” she added.

“I think it’s a shame that not all Israelis speak it [Arabic] to start with and I think they should learn it,” Israeli-Arab musician Awad said in an interview.

The highly-contested nation-state law, passed by a 62-55 margin in Israel’s parliament last week, defines Israel as the national homeland for the Jewish people. It has near-constitutional power as part of the series of Basic Laws that inform and direct Israel’s legislative and judicial branches.

Two clauses in particular have drawn concern: one which demotes Arabic from an official language of the state to one with “special status”; and another which encourages the promotion of “Jewish settlements.”

“It is important for us to say that it is impossible to cancel out the Arabic language, “said Nadia Massalha, the event’s compere. “There are residents here who live and speak this language, and we must hold onto it and strengthen it and continue working on ensuring that we have the Arabic language here.”

“The language is our past and our future, as is the Hebrew language, and we are not giving up on it,” Massalha told the crowd.

Samah Saleimah an Arab from the mixed Jewish-Arab village of Neve Shalom urged Arabs and Jews to unite and fight against the new law.

The event dubbed “the largest Arabic lesson in the world” was a joint initiative by a consortium of Israeli civil society organizations working towards a shared society: Hand in Hand: Center for Jewish-Arab Education in Israel, the Abraham Fund Initiatives, Sikkuy and Givat Haviva.

Director of public affairs for Sikkuy Edan Ring referring to the crowd said: “These are people, who see Arabic as a cultural treasure rather than a threat, as some of our politicians do. It is truly sad that we have come to this, that speaking Arabic in the center of Tel Aviv is today seen as something subversive.”

The nation-state law has received a barrage of condemnation domestically and internationally.

On Saturday, Zionist Union lawmaker Zouheir Bahloul said he was resigning from parliament slamming the government for its championing of “ethnic separatism” and passing legislation “with symptoms of apartheid.”

MK Mohammad Barakeh of the left-wing Hadash party said he would enlist the United Nations, the European Union and the Palestinian Authority President Mahmoud Abbas to help the matter.

Prominent US lawyer and Israel advocate Alan Dershowitz slammed the law as “unnecessarily provocative” in an interview with i24NEWS on the grounds it would make Israel hard to defend.

Earlier this week in light of the bill, Turkish President Recep Tayyip Erdogan – a frequent critique of Israel – branded the country the world’s “most fascist, racist state” and said that the “spirit of Hitler has found its resurgence” in the country’s leadership.