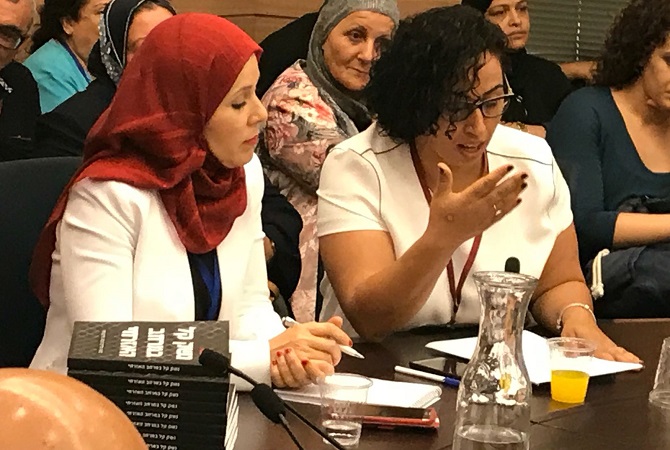 The Abraham Initiatives and Aman Center have launched a new campaign calling on the Arab public to vote to address rising violence in Israel’s Arab community.

At the heart of the campaign is a request that Knesset members and candidates commit to taking five steps, in the first 100 days of the establishment of the 23rd Knesset, that the NGOs believe could help combat violence.

“We see the problem of violence and crime as a political issue related to various government policies and institutions and their relationship to Arab society,” said Rada Jaber, director of the Aman Center. “The larger and more significant our political representation, the more we can put pressure on the government to address the issue.”

In July, Arab MK Ayman Odeh declared Arab society “in a state of emergency,” in response to the release of the “2018 Personal Security Index: Violence, Crime and Policing in Arab Towns” report by Abraham Initiatives, the Samuel Neaman Institute and the Technion-Israel Institute of Technology. That report found that 61% of all murder and manslaughter victims in Israel in 2018 were Arab citizens, despite Arabs constituting only 20% of Israeli citizens.

The survey also found that more than one-third (36%) of Arab citizens of Israel have a sense of personal insecurity in the community where they live, due to violence, compared to 13% of Jews. Moreover, 59% of Arab citizens are afraid of being victims of violent offenses.

In July, Odeh called on the government to develop “a strategic plan to eradicate violence immediately.” Soon after, on October 30, Prime Minister Benjamin Netanyahu announced that a committee was established in the Prime Minister’s Office to come up with a national plan within 90 days to eliminate the increasing level of violence and crime in Arab-Israeli society. Ninety days would have been January 30, but no plan has been revealed.

“As far as we know, not long after the prime minister announced the establishment of this committee, it was already common knowledge that they can not build this plan within 90 daysm” Amnon Be’eri-Sulitzeanu, co-CEO of the Abraham Initiatives, told The Jerusalem Post. “There was not an option that they could lay out a serious plan in 90 days and, as far as we know, and the process is taking even longer due to the elections. However, it is an important step in the right direction.”

The Abraham Initiatives campaign, which includes billboards in Arab communities across the country and widespread digital advertising, asks citizens to sign a petition and lists the five steps of the 100-day plan. These steps include declaring violence and crime in Arab society as a national emergency that is harmful to the state; increasing budget for programs to combat violence against women; placing security cameras in crime-prone communities in coordination and in partnership with the local authorities; implementing stricter legislation and punishments against crime organizations; and working to eliminate drugs and illegal weapons selling points.

The campaign is targeting political parties and politicians from across the spectrum, Be’eri-Sulitzeanu said, as the organizations “expect every government – Blue and White, Likud, Right or Left – to be committed to eradicating violence against Arab citizens.”
With less than a month before the March 2 elections, Be’eri-Sulitzeanu said he is not sure how many signatures the campaign will receive, but he is hoping there will be enough to put pressure on the government.

“We only launched yesterday,” he said. “It is far too early to estimate how successful we are going to be.”

The campaign builds off a series of protests that took place in recent months by hundreds of thousands of Arab citizens, which have better brought this issue to the forefront of public and political discourse.

“Arab society in Israel has never faced a social disaster of this magnitude,” said Aman Center chairman Sheikh Kamal Ryan, who lost his son in a violent incident. “Only widespread mobilization and pressure from all of us on the government will force anyone who takes Arab society seriously to begin to deal with the violence.”