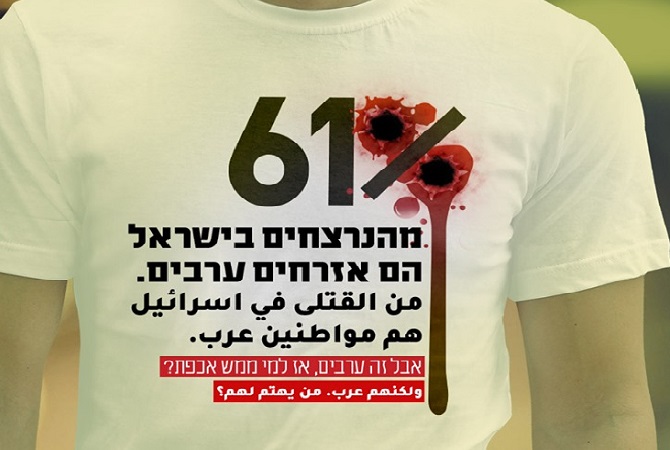 Arab citizens are being terrorized by criminals and life in Arab communities has become hellish. It wasn’t always that way, but 19 years ago, after the police gave a chilling demonstration of what it thinks of Arab citizens (reminder: It ended with 13 people dead), Arab society simply expelled them, physically and consciously. The police, for their part, cooperated, preferring to limit to a minimum their involvement with law and order in Arab towns. This under-policing created a terrible vacuum that became fertile ground for crime, which has risen and flourished. Today it’s clear that it’s a disaster.

In recent years, more than half of criminal deaths in Israel have been Arabs, while Arabs are 20 percent of the population. In 2019 there has been a steep rise in the number of those killed; to date 65 Arabs – 55 men and 10 women – have lost their lives to crime, a 47 percent increase over the same period last year.

To put an end to violence and crime in the Arab communities and to promote personal security, safety, prosperity and quality of life, one must address seven aspects of the big picture:

* Personal security is a basic right, and as such the anger and frustration in the Arab communities is justified and understandable. This rage ought to be translated into an unequivocal demand that the government provide effective and fair policing, protection and personal security. The community cannot divorce the police again and it would be a mistake to issue calls or take action against them, because only they have a real ability to battle crime and fight criminals.

* Opening new police stations in Arab communities is not, by itself, a guarantee that the scope of crime will drop and that a feeling of security will increase. But new police stations can be an important element in fighting crime on condition that they be accessible and service oriented; they will reduce the police’s response time to incidents, be attentive to the problems of the community and work to improve the quality of life. On the assumption that the police are prepared to dramatically improve their performance in Arab communities, they should be helped to build new stations.

* Not even the best police force can provide security and protection without the backing and trust of the community it serves. Police must gain public trust by responding quickly and effectively, solving crimes, conducting dialogue, acting with transparency toward the public and its leaders, and particularly by understanding that Arab citizens, like Jewish citizens, are entitled to equal protection and service.

* The police play an impossible dual role vis a vis Arab citizens. On the one hand, the Arabs are perceived in the civilian context as being entitled to protection and quality of life, while in the security context they are seen as a potential threat. Until widespread structural reform is made exempts the police from security duties, it must step up the civilian-service component that works for the citizens’ benefit.

* The police and Justice Ministry must combat the proliferation of illegal weapons in Arab society, through anonymous weapons amnesty campaigns, while at the same time intensifying activities to confiscate weapons and issuing dramatically harsher punishments for weapons violations.

* The systematic discrimination and neglect of Arab society by generations of Israeli governments has caused in-depth problems that now manifest themselves in violence and crime. These factors require a systematic and continuous response as part of a national master plan to eradicate crime in Arab communities, to be formulated by an inter-ministerial committee operating from the Prime Minister’s Office. Among the steps required are the eradication of widespread poverty, whose link to crime has been proven; approving detailed construction plans in existing localities and accelerating the establishment of new Arab cities, to reduce the land and housing shortages that are fertile ground for disputes between families; making capital and credit available to Arab citizens while developing financial services, loans and mortgages tailored to their needs, to reduce the need for normative citizens to seek loans in the gray market; developing employment, recreation, leisure and athletic options to provide outlets for the “hookah generation” (unemployed young people aged 17-25); and investing in formal and informal education the Arab community, with an emphasis on violence prevention, conflict resolution and safe conduct on social networks.

* Arab society and its leadership at all levels must contribute to fighting crime by publicly denouncing criminals (some of whom nowadays serve as role models for youth), as well as crime and acts of violence, including those rooted in lifestyle, cultural and social norms.

Only a combined effort, which includes collecting weapons, building additional police stations and equitable policing, together with seeking solutions for social problems, can bring about change. For these reasons, there must be a government emergency plan to uproot the phenomenon.

Amnon Be’eri-Sulitzeanu and Thabet Abu Rass are Co-Executive Directors of the Abraham Initiatives.