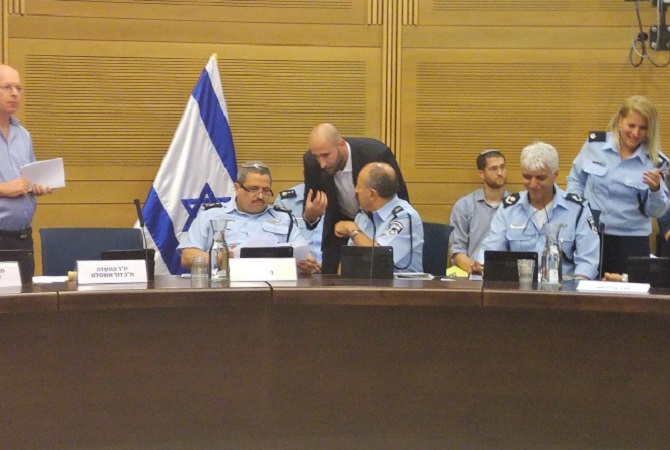 By Aaron Boxerman November 10, 2020, originally published in Times of Israel

Prime Minister Benjamin Netanyahu vowed on Monday that he would work to bring a long-awaited proposal to fight organized crime and violence in Arab Israeli communities for approval by the government within the next two weeks.

״Combating crime, combating the reign of fear, combating protection rackets — I want to do this comprehensively,” Netanyahu said. “We will need legislation on this as well as all of your help.”

Netanyahu delivered his remarks at a special meeting of the Knesset Committee on Violence in Arab Society at which a governmental initiative to combat the phenomenon was presented. The committee was formed after mass protests by Arab Israelis in fall 2019 against the spread of organized crime in their towns and cities.

In a rare sighting of the prime minister attending a parliamentary committee discussion, Netanyahu highlighted what he characterized as the “great improvement” seen under his government in closing gaps between the Jewish and Arab communities in Israel.

The last time Netanyahu participated in a Knesset discussion on combating violence in Arab communities was in 2012. In the intervening years, the number of homicides among Arab Israelis has risen dramatically. Arab Israelis constitute 20 percent of the country’s population, but accounted for 67% of the country’s homicides in 2019, according to the Haaretz daily.

According to a 2019 study by the Abraham Initiatives nonprofit, which works to advance shared society initiatives in Israel, 60.5% of Arab Israelis reported a sense of personal insecurity in their hometowns due to violence, compared with only 35% of Arab Israelis in 2018. By comparison, only 12.8% of Jews reported such a feeling.

Parliamentarians from the mostly Arab Joint List expressed skepticism of the government’s commitment to fighting organized crime among Arab Israelis.

Arab Israeli policymakers have long blamed the violence on what they call an unwillingness by the Israel Police to root out organized crime in their communities.

“The sovereign, which resolves disputes between people in Arab society, isn’t the police. It’s criminal organizations,” Yisrael Beytenu MK Hamad Ammar, who is Druze, said during the discussion.

The wide-ranging plan was drafted by the Prime Minister’s Office in consultation with a raft of Arab civil society figures. Among dozens of recommendations, it would work to strengthen police activity in Arab communities, integrate young Arab men in the workforce, implement various methods to ensure that state funds stay out of the hands of organized crime, and increase the penalties for illegal arms possession.

Wadi Ara Council Head Mudar Younes, who chairs the Union of Arab Municipalities, expressed concern with several aspects of the plan. Younes was particularly skeptical of the plan’s stated goal of “a wide-ranging draft of police officers from Arab communities.”

“If we start with this idea that it’s a ‘Muslim officer’ who must provide services, we’ve taken all the content out of the idea that the police ought to provide equal service to all citizens, whether Jewish or Muslim or Christian,” Younes said.

In a statement, the Abraham Initiatives — one of the key organizations that advised the government on the plan — hailed the proposal’s presentation as “important tidings. But it added that the proposal needed to be expanded to include measures to combat domestic violence and hold police officers accountable, among other ideas.

During the meeting, Joint List MK Mansour Abbas, who chairs the committee, repeatedly called for a practical timeline for the plan to be ratified by the government.

“What is the timeframe at our disposal? Right now, we’re counting it in murders,” Abbas said.

The Abraham Initiatives also urged that concrete goals be set and the plan be implemented as soon as possible.

“The plan must be translated into practical steps. The plan’s principal weakness is that no mechanisms have been given for its implementation,” the Abraham Initiatives said in a statement.

The discussion descended into loud arguments when Acting Police Commissioner Motti Cohen told the committee that when it came to combating violence in Arab society, “we need to talk about culture.”

“Arab society, what is its place and its responsibility in relation to this area, the culture within Arab society,” Cohen said while explaining reasons for high levels of crime in Arab towns and cities.

Lawmakers from the Joint List responded angrily to the remark. Joint List MK Iman Khatib-Yassin told the committee the reason for the rise in crime was the living conditions in Arab communities, not cultural factors.

“This is not a matter of culture, this is a matter of giving cover to certain organizations… we’re talking about organized crime, illegal weapons, a lack of employment,” said Khatib-Yassin.

This is hardly the first time government officials have debated the roots of elevated rates of violence in Arab society in such terms. Former public security minister Gilad Erdan also attributed the wave of violence in Arab Israeli communities to culture, drawing accusations of racism.

Other Joint List politicians were critical of Abbas’s deference to government officials in the room. Abbas, who heads the Ra’am party in Joint List, is reportedly considered to be too friendly to the ruling coalition and to have his own channels of communication with Netanyahu’s Likud.

“If the state and the government takes a good step — then we have to say yashar koach, well done,” Abbas told Army Radio on Monday night.

“The Arab community yearns to put an end to the plague of crime and is fed up with the empty promises of Netanyahu. We will not pander to a prime minister who incites against us, nor to an acting police commissioner who claims that our culture is violent, just so that they start doing their jobs,” Odeh said in a statement after the meeting.