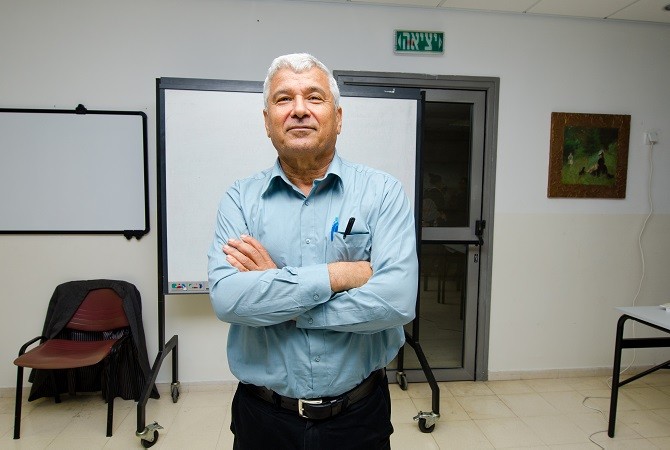 In the neck-and-neck Israeli election April 9, the vote of Israeli Arabs and the conflict in Gaza could prove decisive in selecting Israel’s next prime minister.

“The overwhelming majority [of Israeli Arabs] see themselves as Israeli citizens … and would like to be part of the [country’s] decision-making process,” Thabet Abu Rass, co-director of the Abraham Fund Initiatives and a member of Israel’s minority Bedouin community, told The Jewish Week in a phone interview from Israel. “We are knocking on the doors of the political parties. Just like charedi [fervently Orthodox] Jews, we don’t have to agree with you on everything, but we are citizens. … You cannot hide 20 percent of the country. You cannot marginalize us.”

But Abu Rass, 64, and the father of two, said that speaking for himself he wants no part of the right-wing Likud government headed by the current prime minister, Benjamin Netanyahu, who is seeking a fifth term in office. Instead, he said, he would like to see Netanyahu’s chief rival in the election, the newly formed center-left Blue and White party of Benny Gantz and Yair Lapid, reach out to Israeli Arab voters and promise to include them in their next government.

However Gantz, a retired military chief of staff, has rejected that proposition, saying he would be willing to form a coalition only with “anything that is Jewish.” And Yael German, a left-wing member of Blue and White’s mix of rightist, centrist and leftist candidates, said this week that Blue and White would not bring Arab parties into any coalition it forms because neither of the two Arab coalitions running (Hadash-Ta’al and UAL-Balad) would accept Israel as the Jewish state.

Asked his reaction to her comment, Abu Rass said German and her party are “joining the right wing in Israel who are working hard to delegitimize the Arab voters and their parties. … Israel is not only the state of its Jewish citizens, it is my country too. Israel will always be examined by its treatment of the Arab minority. … I did not immigrate to Israel, but the state of Israel was born in 1948 while my family was here. The nation-state laws are the problem, not my demand for full equality as a citizen.”

He went on to say that the refusal of either of the two frontrunner parties to consider including the Arab parties in their coalition is “bad for the State of Israel. … This way they both delegitimize the Arab vote and it is why so many Arabs are declaring that they will boycott this election. If my vote doesn’t count, why should I vote? That’s why I am demanding that Gantz change his stance … and come out with an inclusive message towards Arab citizens. They are equal and are very concerned with the nation-state law. The immediate result of the law is the delegitimization of the Arab voter and incitement against the Arabs.”

Slightly more than half (52.7 percent) of Israeli Jews surveyed in January believed the law, which was passed last July, should recognize Israel is a “democracy with equal rights to all citizens of the state.” But Netanyahu disagrees. In response to a recent social media post from Israeli model and TV host Rotem Sela — who asked why Likud has a “problem with Arab” Israelis because “Israel is a state of all its citizens” — Netanyahu replied, “Israel is not a state of all its citizens. According to the nation-state law we passed, Israel is the nation-state of the Jewish people — and not anyone else. As you wrote, there is no problem with Israel’s Arab citizens. They have equal rights and the Likud government has invested more than any other government in the Arab population.”

In his remarks to the AIPAC convention in Washington Tuesday, Netanyahu repeated that refrain, saying Israel “is home to all Jews” and “all Israeli citizens, whether Jew or Arab, are first class citizens. … All citizens have exactly the same individual rights,” which “remain sacred.”

At the same time, some Israeli leaders have viewed Israeli Arabs with suspicion. Last May, then-Defense Minister Avigdor Lieberman accused the head of the Joint (Arab) List, Ayman Odeh, and his associates of being a “fifth column” that should be “outlawed” because of their support for a Gaza solidarity protest in Haifa that he claimed sided with Hamas, the terrorist group that controls the Gaza Strip, over the Israel Defense Forces.

Nevertheless, a poll of Israeli Arabs taken in January for the Abraham Fund Initiatives found that 64 percent of Israeli Arabs support the participation of Arab parties in Israel’s coalition government — a figure that jumps to 68 percent if the coalition is formed by a center-left government.

Despite Gantz’s insistence that he would not include Arab parties in his coalition government, Shibley Telhami, director of the University of Maryland’s Critical Issues Poll, said his poll of 713 adult Israeli Arabs conducted March 10-12 found that a majority believe Gantz’s pre-election position will change should he need the Arab parties to form a government.

“Some 53 percent of those polled still think there is an opportunity for a coalition, and over 70 percent said they want to be in a coalition but don’t think the Jews want it,” he added.

He noted that his poll of Israel’s Druze population — they serve in the Israeli military and represent about 10 percent of Israel’s Arab population — found that fully 54 percent said they would vote for Gantz next month, and he noted that Gantz is focused on them more than other Israeli Arabs.

Among Israeli Arabs in general, Telhami said, although they are still “strongly Arabs and Palestinians, that is declining slightly” because the percentage who identify themselves as Israeli first rather than Palestinian, Arab or Muslim increased from 12 percent in 2011 to 17 percent.

But, noted Abu Rass, Gantz and his Blue and White party “are putting Arab voters between a rock and a hard place. … It seems Arab voters are pawns in a soccer game and everyone is kicking them to someone else. We are in a Jewish and democratic state. Is Israel a democracy or not? Right now, I’m not proud to be an Israeli citizen — and I want to be.”

At the same time, a poll released this week found that 42 percent of Israelis — 700 Israeli Jews and 100 non-Jewish citizens — support some form of annexation of the West Bank. The poll, conducted for the Israeli newspaper Haaretz, found that fully 27 percent favor annexation of the entire West Bank, which is home to nearly 3 million Palestinians and about 500,000 Jewish settlers. Only 28 percent said they favored no annexation and 30 percent said they were not sure.

Also weighing on the election is the conflict in Gaza, which was touched off early Monday by the firing of a rocket from the Gaza Strip deep into Israel — some 20 miles north of Tel Aviv — that injured seven Israelis, destroyed a home and damaged nearby homes and cars. It followed by less than two weeks the firing from Gaza of two rockets at Tel Aviv that caused no damage. Hamas said its rockets had been fired by “mistake.”

“The majority of the Israeli Arab population sympathizes with the suffering in Gaza and if Israel hits hard and there are a lot of civilian casualties, it could become a divisive issue between Arabs and Jews and Gantz would not be cultivating their support,” said Telhami.

Abu Rass noted that he has many family members living in refugee camps in Gaza and believes an Israeli military “siege on Gaza is not going to help. … It is time for a new peace initiative and to give the Palestinians their own state.”

The upcoming election also highlights the fractured relationship Israeli Arabs have in Israel: at the same time they are shunned as coalition partners, they are slowly becoming a part of the fabric of the country. For instance, there are now 868 Arab teachers teaching in Jewish schools in Israel and about half of them teach math, English and science. Although it is only a relatively small number compared with the country’s 179,000 teachers, it is an increase compared to the 465 who taught in 2013.

“We are also in Israel’s hospitals, in technology and academies and the media,” Abu Rass pointed out. “How can we not be in politics?”