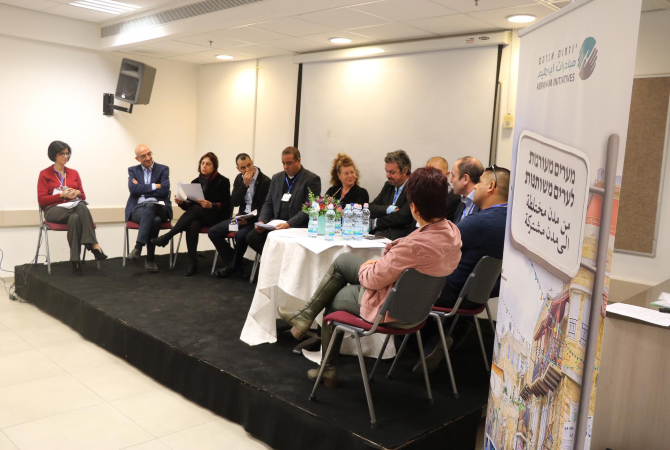 FIRST SHARED CITIES CONFERENCE IN ACCO
Every mixed city is a world full of complexities and challenges, but it is also where communities meet and create relationships between Jews and Arabs, building a shared life together. But this doesn’t happen in a vacuum – it takes a lot of work. In a reality where more Arabs are moving to mixed cities, one must think about which city management models work for all residents. That is why we held our first mixed cities conference in Acre this week, where we launched our new venture, which aims to develop policies for managing the mixed cities and shaping them as inclusive and equitable spaces. Over 120 city council members, professionals, social activists and stakeholders gathered to talk about how to transform mixed cities into shared cities.

IN-DEPTH SURVEY EXAMINES RELATIONSHIP BETWEEN ARABS & JEWS IN ALL 7 MIXED CITIES
Our new in-depth survey, presented at the conference, systematically examines and compares Jewish-Arab relations in the mixed cities. The extensive survey includes 2,100 residents of the 7 cities involved: Haifa, Acre, Lod, Ramla, Jaffa, Nof Hagalil (formerly Nazareth Elite), and Ma’alot Tarshiha. The findings were presented by Dr. Hisham Jubran of the Afkar Institute which conducted the survey. Dr. Jubran presented a complex and multidimensional picture of life in mixed cities. On the one hand, 81% of Jewish respondents and 89% of Arabs described the relationship between Jews and Arabs in their cities as positive. On the other hand – 18% of Jewish residents of mixed cities fear entering the Arab neighborhoods, and 14% of Arabs in these cities report that they often encounter discrimination, and there are quite a few who want to live in separate neighborhoods – 41% of Jews and 32% of Arabs in all cities consent to separation.
But the exciting findings emerged from the questions we asked about education. The findings have provided very broad support for co-education in various ways. 55% of the Jews and 86% of the Arab residents of the mixed cities are ready to send their children to a bilingual school. 36% of Jews and 39% of Arabs in all cities strongly agreed with the statement, “I am in favor of joint study subjects between Arab and Jewish schools” (ie, Arabs and Jews from neighboring schools studying certain subjects together).
40% of Jewish respondents and 42% of Arabs in all cities strongly agreed with the saying: “I am in favor of joint educational programs for Jews and Arabs.” These are surprising and encouraging results, which show that the public, more than ever, desires the advancement of joint educational initiatives. It is time for all the mixed cities to operate, and to establish bi-lingual schools, to promote shared learning and to develop informal education programs for Jews and Arabs together.

The survey language was Arabic for Arab residents and Hebrew for Jews ones. The survey was conducted between November 14 and 23, 2019 by the Afkar Research Institute, led by Dr. Hisham Jubran.

For key findings from the survey results: HERE

For media coverage of the survey:

Jerusalem Post: Mixed cities residents get along but hesitant on kids playing together.

Israel Hayom: Cities with Mixed Populations are Breaking Down Barriers

For an overview of our Shared Cities initiative