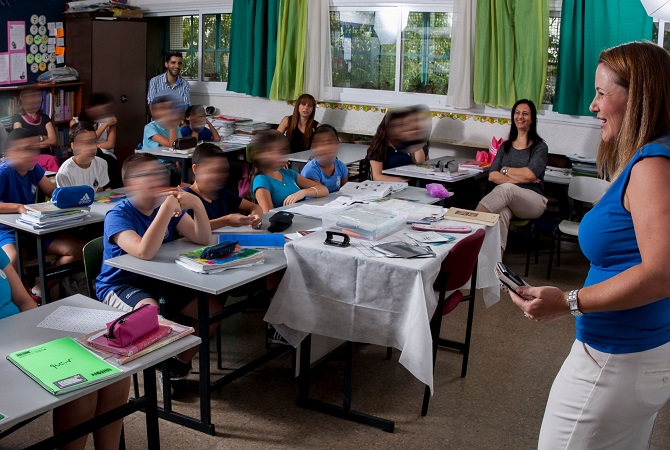 A comprehensive reform of the way Arabic is taught in Israel’s schools is needed in order to better engage students in both the language and the Arabic culture, fostering closer ties between the groups, according to a new report.

The in-depth report, entitled “Arabs, Jews, and Arabic: The Challenges of Arabic Instruction in Israel” conducted by the Abraham Initiatives and the Van Leer Jerusalem Institute, drew on a study based on interviews with middle and high school students from across Israel about their experiences of studying Arabic and their motivation for doing so. Those interviews revealed that, although the students agreed that learning Arabic is important for helping them to better understand the lives of their Arab neighbors, they do not feel that the current curriculum meets this need. They also revealed that their primary motivation for taking the subject was to gain entry to intelligence units within the military. When not presented with any other potential motives, they cite this as the main motivating factor.

The report, edited by Dr. Yonatan Mendel, May Arow, Dr. Thabet Abu Rass, and Gal Kramarski, further drew on previous work done in this area by the Van Leer Jerusalem Institute, in which it was found very low levels of Arabic literacy in the Jewish Israeli population. Just 2.4% of Israeli Jews can read a short text in Arabic, 1.4% can write a paragraph or email in Arabic, and a mere 0.4% can read a whole book in Arabic.

“Arabic instruction fails to meet the basic civil needs of communication, conversation, and expression. A comprehensive reform should be introduced in Arabic language instruction,” the two organizations said in a statement.

The Abraham Initiatives has been instrumental in promoting excellence in Arabic teaching in Israel, through its Ya Salam program, through which spoken Arabic is taught by Arab teachers in some 200 schools in Israel. The program, which sought to show that Arabic could be taught in an engaging way, has drawn praise in evaluation studies and been recognized in the Knesset.

Also instrumental has been the non-profit Merchavim, which collaborated with the Abraham Initiatives on a new textbook for Arabic studies in Israel. The textbook serves as the continuation of the Ya Salaam program and the Ta’alu Nihki – Let’s Talk program of the Merchavim Institute, however, it has not yet been accepted within the core curriculum.

The Abraham Initiatives and The Van Leer Institute have now called for these proven resources to be rolled out throughout the country as a key part of the curriculum.

Dr. Yonatan Mendel and Gal Karamarski of the Van Leer Jerusalem Institute commented: “Although one-fifth of the citizens of Israel are Arabs with Arabic language and culture; although many Jews in Israel have their origins in Arab countries (and for these students, Arabic is their heritage language); and although Arabic is a language with the potential to bridge people and cultures across the Middle East, and to promote a civil and egalitarian society in Israel – few Jews in Israel are capable of holding a conversation or exchanging basic correspondence in Arabic.

They added: “The average Israeli student completes 12 years of school without acquiring basic skills in Arabic. There is a need to reconsider all relevant components – the approach to learning, study years, study requirements, teachers, teacher training, acquaintance with Arab students, etc.  This is vital for the sake of relations between Jewish and Arab citizens and for promoting peace and neighborly relations between Israelis and Palestinians, and the nations of the Middle East.”

The two organizations have together recommended a sea-change in the way Arabic is taught, changing perceptions of the topic from being a mere language, to becoming a way for Jews and Arabs to better connect and understand one another. The language should be set within a social, cultural, political and historical context, framing the lessons as a conduit for promoting co-existence between Arabs and Jews, they say.

They believe Arabic should be taught throughout a child’s school life, from first grade through to twelfth, and that the lessons should be taken by Arab teachers.

And they would also like to make Arabic a compulsory subject required for obtaining a full matriculation certificate.

“Although familiarity with the Arabic language has been defined in legislation as one of the goals of state education, and although there is consensus in Israeli society concerning the importance of the ability to converse in Arabic, the desired change in the education system has yet to be completed,” Amnon Be’eri-Sulitzeanu and Dr Thabet Abu Rass, the co-executive directors of the Abraham Initiatives said.

“We have already proved through the Ya Salaam program that when done correctly, it is possible to integrate Arab teachers in Jewish schools. The students then not only enjoy studying Arabic language and culture, but their studies also help to reduce stereotypes and prejudice. A perceptional change must be made in the approach to Arabic instruction in order to reach a situation where all Israeli citizens can speak fluent Arabic,” they added.

Education for a Shared Society