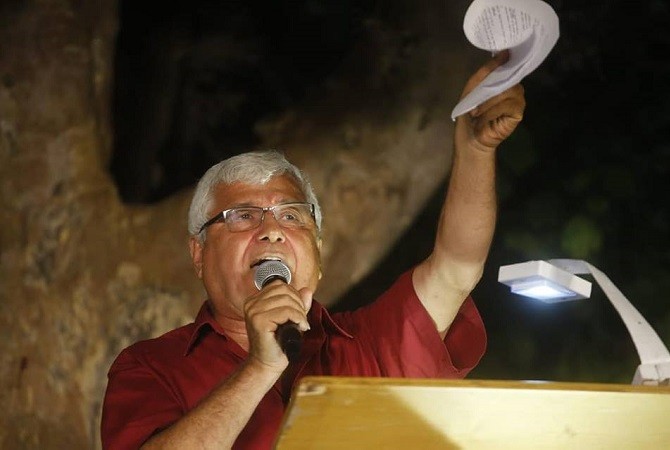 Arab leaders called for international intervention against the Israeli government Thursday after it passed landmark legislation harming the status of the Arab minority and raising comparisons to apartheid.

The law, named ‘Israel as the Nation State of the Jewish People’, effectively gives state sanction to the creation of residential areas for Jews only that would be off limits to Arabs, according to legal scholars and Arab rights activists.

It also demotes the Arabic language from being an official language in Israel to one with an unspecified “special status,” while enshrining Hebrew as the “state language”.

A statement issued by the Arab Joint List, the major Arab political grouping and third-largest party in Israel, called on “the countries of the world and international organizations to pressure the Netanyahu government so as to restrain its crazy racist excesses”.

Observers say the bill could be the beginning of a wave of sweeping Israeli government moves against the country’s Arab population.

“This is a creeping apartheid law that is just the beginning of a series of discriminatory laws against the Palestinian citizens of Israel,” said Thabet Abu Rass, co-director of the Abraham Fund Initiatives, an Israeli NGO that works to promote equality.

The law, which passed at 3 a.m. Thursday by a 62-55 vote after prolonged debate, weakens the democratic aspects of the Israeli system and fortifies the Jewish nationalist ones.

“It’s a tremendous blow to democracy because by law it gives dominance to one ethnic group over another and it doesn’t even add protection for the minorities,” said Galia Golan, a political scientist at the Interdisciplinary Center in Herzliya, near Tel Aviv.

“It definitely takes us out of the Western liberal camp and puts us in the xenophobic super-nationalist Eastern European camp. It’s terrible. No question it’s a disgrace,” she continued.

For Arab Israelis, who make up 20 per cent of the country’s population, the legislation is a bid to further their alienation by the Israeli right-wing. Arab lawmakers publicly ripped up the bill after its passing in parliament. Ahmad Tibi, lawmaker of the Arab Joint List, called its passing the “death of democracy” in Israel.

“Everyone understands what this law is. It enshrines the Jewish majority as dominant and ruling without protection of the rights of anyone else,” Ms Golan added.

The law specifies that only Jews have the right to self-determination in the land and delineates the symbols of the state, which are Jewish. It specifies that “the state views the development of Jewish settlement as a national value and will work to encourage and advance its establishment”.

The clause gives legitimacy to an existing government policy of segregation and will make it harder for Arabs to challenge that policy in the courts, according to Mr Abu Rass.

“This is closing the door for even specific cases of Arabs being able to live in Jewish towns. Settlement will be off limits to Arabs,” he continued.

Israeli Prime Minister Benjamin Netanyahu spoke after the vote with great enthusiasm about the law, which promises to boost his popularity with right-wing voters.

“We enshrined in law the basic principle of our existence. Israel is the nation state of the Jewish people, which respects the individual rights of all its citizens. This is our state-the Jewish state. In recent years there have been some who have attempted to put this in doubt, to undercut the core of our being. Today we made it laws: This is our nation, language and flag.”

But Arab citizens who have suffered discrimination since Israel’s founding in 1948 now see themselves as being formally defined as second class citizens.

Ayman Odeh, the chairman of the Joint List, termed it “the law of Jewish supremacism that excludes more than twenty percent of the citizens. It is a law intended to provoke, divide, disparage and continue the incitement wave of the Netanyahu government. This is the tyranny of the majority that seeks to run over the minority.”

The demotion of Arabic is expected to harm efforts to increase its presence in the country, and it is feared that henceforth when Israel builds new airports, malls and universities there will be no signs in Arabic.

The law can be attributed in part to the dissipation of the left in Israeli politics after the 1995 assassination of Prime Minister Yitzhak Rabin and the collapse of the peace process with the Palestinians as Prime Minister Ehud Barak declared after the Camp David summit in 2000 that there was no Palestinian partner.

The Israeli right’s agenda of settlement in the occupied territories and the waging of Zionism as a continuing revolution – for Jews only and at the expense of Arabs – has been basically unchallenged in recent years. With the left discredited and amid Palestinian attacks during the second Intifada, or uprising, the public shifted rightward.

Israeli politics today is largely an exercise in right-wing politicians competing with each other over who can be more nationalistic and anti-Arab.

If anything, the nationality bill vindicates the longstanding argument that occupying the Palestinians in the West Bank would undermine democracy in Israel. Inside Israel itself Arabs are increasingly seen not as human beings with equal rights but as an enemy whose status should be inferior to that of Jews.

Legal scholar Mordechai Kremnitzer wrote in Israeli newspaper Haaretz: “There is no choice but to conclude that policy akin to apartheid (on an ethnic basis) that exists in the territories is now proudly entering inside Israel.”