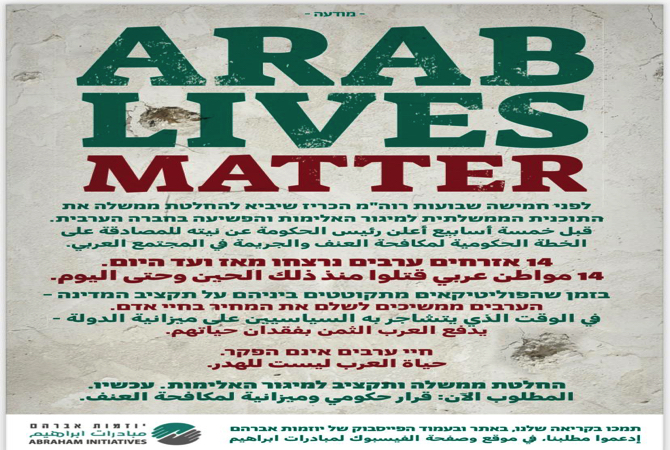 The survey was based on 501 responses, and was drawn from a sample of the Arab Israeli population in the Galilee area, the Arab Triangle and mixed Jewish-Arab cities.

A new survey conducted by The Abraham Initiatives in late October has found that most Arab Israelis (58%) would participate in the Israel protest movement against Prime Minister Benjamin Netanyahu if it highlighted ongoing issues facing the community, such as the economic situation and housing. Likewise, almost three-fourths (73%) support the goals of the protest movement.

The survey was based on 501 responses, and was drawn from a sample of the Arab Israeli population in the Galilee area, the Arab Triangle and mixed Jewish-Arab cities.

“Political involvement of Arab citizens reflects participation and belonging. In recent months, we have witnessed a wave of political and  economic protests surrounding the coronavirus crisis, but the public perception is that Arab citizen participation in these protests has been limited,” Dr. Thabet Abu Rass and Amnon Be’eri-Sulitzeanu, co-executive directors of the Abraham Initiatives noted in a statement.

“This reality prevails despite the fact that the stated aims of the protests are mostly in line with Arab society’s political stances, as reflected in surveys as well as in voting patterns in the three election cycles of 2019/2020,” they said. “The survey findings indicate that Arab citizens express great interest in the protests; however, it is clear that the protests are not relevant enough to core issues specific to Arab society.”

Other findings include the way in which Arab Israelis perceived the cause of the protests, with some identifying the need for improving the economic situation. Almost half (47%) indicated opposition both to Netanyahu’s corruption, and said that the protests oppose government mismanagement (45%), and 13% think that the protests are against the lockdown and in favor of restoring economic activity.

On the question of whether the protests are influential, 52% agreed or strongly agreed with the statement “I am very frustrated that Arab protestors are unable to make any change in Israel’s political establishment.”

On the other hand, the survey also found that 83% of Arab citizens said that they have no place in the protest movement as of now.