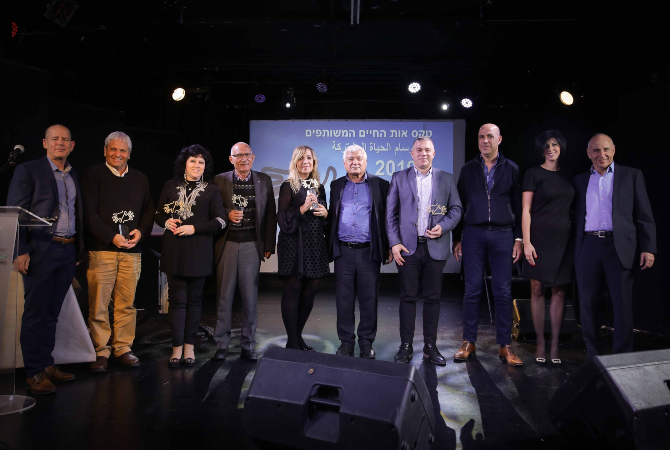 Last night the Abraham Initiatives presented the 2019 Shared Society Award at a festive ceremony in Haifa. This marks the 3rd year that the Abraham Initiatives has awarded the prize which is given to individuals or organizations, in recognition of significant action taken to promote integration and/or equality between Jewish and Arab citizens of Israel. Each winner is a pioneer in their field; dedicated to modeling and building an equal society for the Arabs and Jews of Israel.

Award recipients, honored for the promotion of equality between Jews and Arabs:

Attorney Emi Palmor – Former Chief Justice; Dr. Younes Abu-Rabiya – resident of Be’er Sheva and Israel’s 1st Bedouin physician; Eman el-Kassem-Sliman, a journalist at the Broadcasting Corporation “Kan”, Shalom (Shuli) Dichter – until recently the CEO of Hand in Hand for bilingual education, and before that CEO of Sikkuy; and the Bnei Sakhnin football team.

The Co-Chairs of the organization, Orni Petruschka and Adv. Basha’er Fahoum-Jayoussi, gave the awards saying: “During this period, when the integration of Arabs into Israeli society and the Israeli economy is on the rise, and on the other hand, incitement against Arab citizens has reached new heights, the important work of the recipients of the award, which contributes to the promotion of equality and the inclusion of Arab citizens, their language and culture in the public sphere of the country, are of particular importance. All recipients of the Shared Society Award are pioneers in their fields and in the process of raising awareness and building bridges between Jews and Arabs. Every day they affect society in Israel and make it more and more equal for all its citizens. ”