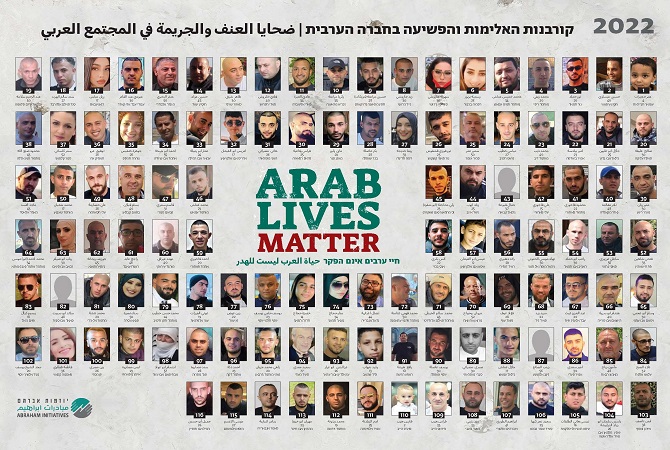 The breakdown of The Abraham Initiatives’ monitor of crime and violence fatalities in Arab society indicates that since the beginning of the year, most (69, 59.4%) victims were 30 years old and under. Seven victims were under the age of 16, the youngest victim being Faris Heib from Nazareth, two years of age. In most cases (101, 87%), the victim was killed by gunfire. Out of 116 fatalities, 13 were women.

📍69 victims were 30 years old and under. Seven were under the age of 16. The youngest victim was just two years old, and the oldest was 77.

This past year was a record year in the number of children who lost their lives in circumstances of crime and violence in Arab society. This statistic, alongside shooting incidents in mourning tents, in broad daylight, and in city centers and residential neighborhoods, testifies to the fact that all red lines have been crossed. Arab citizens in Israel are living without personal security. This phenomenon continues to be the most severe problem facing Arab society in Israel. At the same time, there is an evident halt in the incremental annual rise in fatalities.

We wish to believe that this suspension in the growing number of fatalities is a result of more efficient and decisive action on the part of the government, specifically of the Ministry of Public Security in the context of its Operation “Safe Route,” and on the part of the Israel Police. Within the framework of “Safe Route,” we have seen the emergence of a discourse of trust between those heading up the operation and leaders in Arab society. This is a nonnegotiable condition for the struggle against crime and violence to succeed. *Without a relationship of trust between government ministries and police vis-à-vis the society on the ground, it will not be possible to create change.

In the current political climate, the police is doubly faced with a challenge when it comes to acquiring public trust. With a certified racist in charge of the police, seeking expanded authority over the exertion of force, it is not surprise that public suspiciousness is on the rise; as such, the police must act wisely and sensitively vis-à-vis Arab citizens.

Yet, the foundations laid in the last year is a good basis, and the programs that have already begun must continue: the governmental plan to fight the phenomenon of crime and violence in Arab society (549) including “Safe Route,” inmate rehabilitation, and education against violence. Additionally, mobilizing local government and community leaders contributes to the deceleration of the crime and violence phenomenon: in Umm al-Fahm, for instance, there were 11 fatalities in 2021, whereas this past year there were three. This is thanks to steadfast work on the part of the municipality during this period. On the other hand, the number of victims in the Negev increased in 2022 from 10 fatalities in 2021 to 16 in 2022, which could indicate a crisis in that region.

Moreover, all government ministries must continue to treat root causes, as defined by Government Decision 550 for socioeconomic development of Arab society. In order to guarantee true change, the government must exhaust the allocated budgets, down to the last shekel.

Survey: Attitudes of Umm al-Fahm Residents Regarding Crime and Violence